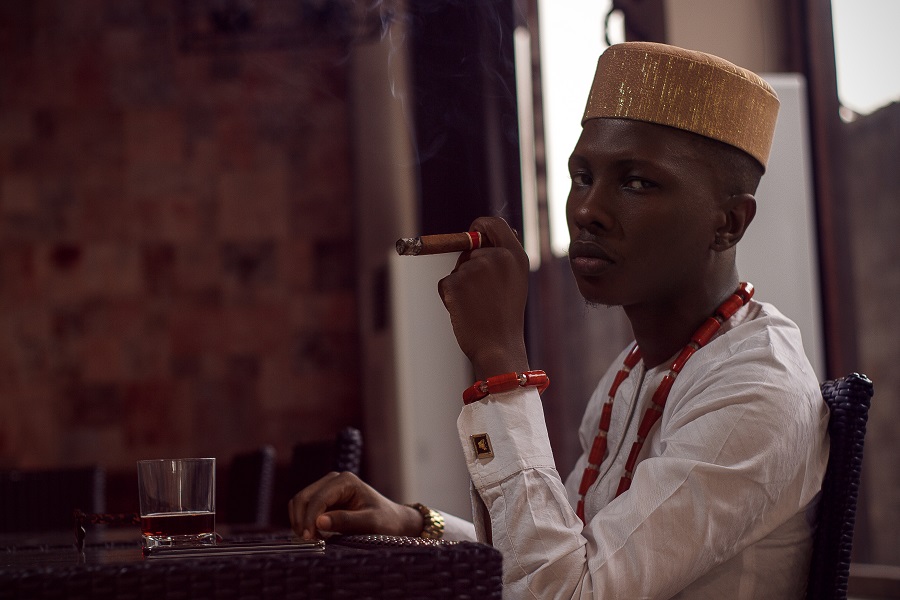 Story by Ìyínkàyé Òrẹòlúwá
He said I’d have to see LIFE, a 2015 film about the iconic American film star James Dean and a TIME photographer Dennis Stock. Moshood was fascinated with the way the movie told the story of the power of a camera lens to not only see a person but also see through them. Only after seeing this film, would he let me photograph him. This was over a year ago. 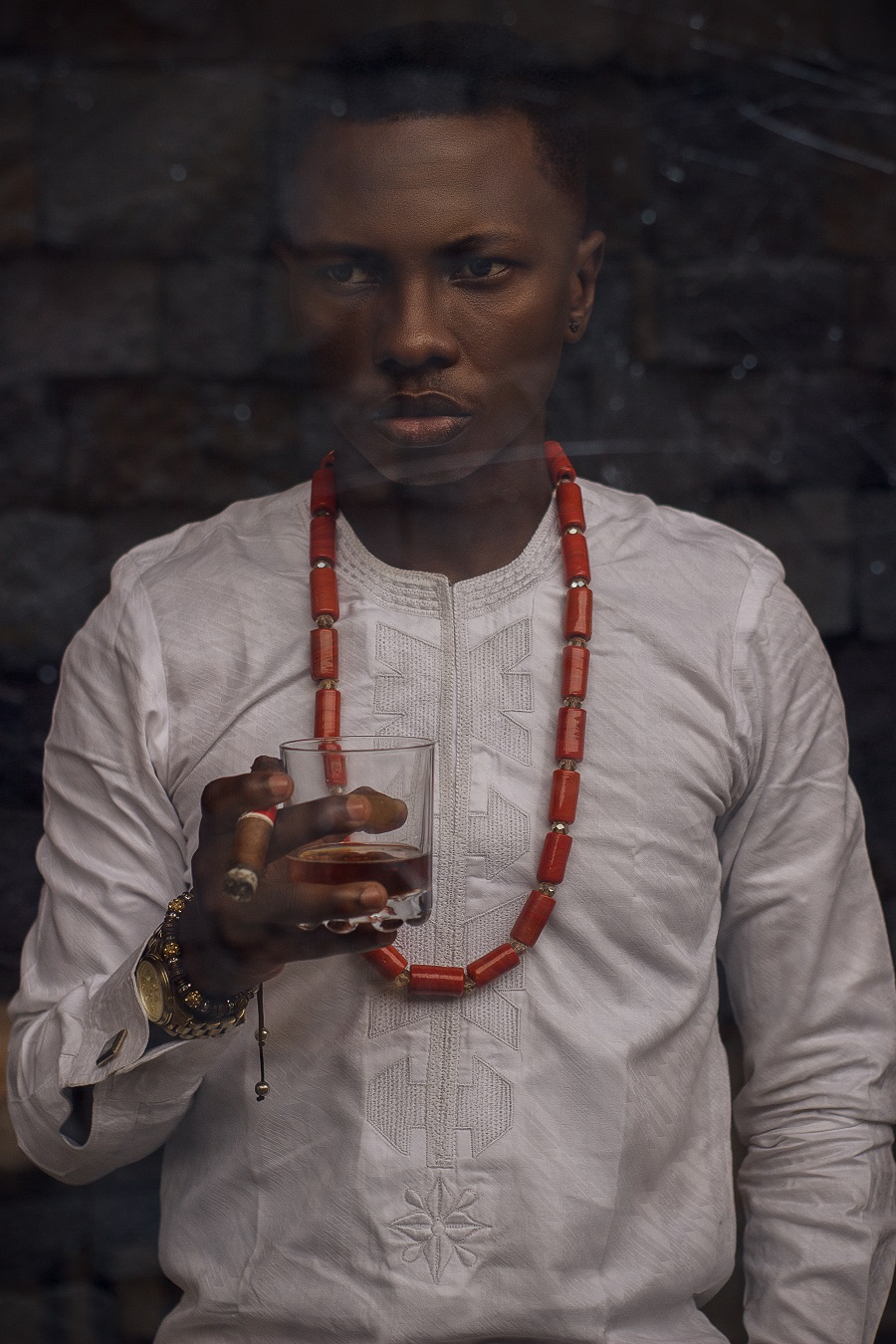 Then one day out of the blue, he reached out to me. “What is your vision for my birthday shoot?” I didn’t even know when his birthday was. After giving me the run-around, he settled on “Uneasy lies the head that wears the crown, but interpreted against the backdrop of African Opulence.” Before I could wrap my head around his concept, he sent me half a dozen pictures of men smoking cigars including; Denzel Washington, Al Pacino, Jack Nicholson and his “second favourite rapper” Jay-Z. The venue was going to be TerraKulture and he was only going to spare an hour because he had a performance later that day. I had never shot a client in an hour, what was he trying to be, a diva? Then he asked me about my camera lenses; at first I thought he was being condescending but I quickly realised that he had a pretty impressive knowledge of cameras and lenses. “An actor must know these things!” I honestly never knew.
Shoot day came and he was as punctual as I was. He welcomed me warmly and escorted me to the location which had already been set up and pointed out the set pieces and different lighting options he wanted to explore. Ayinla Omowura was playing from his Bluetooth speakers and I thought it was interesting that Moshood Fattah was a fan. He quickly changed into his costume but asked for a minute to apply his make-up. “Yes I have my full make-up kit, an actor must have these things!” He declared, in the manner of the iconic Billy Porter.
The shoot started and the music changed to Wasiu Ayinde. His eyes lit up and a few times I caught him humming to the lyrics. He told me he fell in love with the LEGACY album as a child and once wrote a letter to Wasiu Ayinde through his former drummer Aromasodun. “He actually wrote back but sadly I lost the letter, do you know what it would be worth today?” Everything went on fine; he lit up a cigar and mumbled something about how he had to learn how to correctly cut and light a cigar. His left hand clasped a glass of rum- “but it’s actually tea, did you think I was going to risk getting drunk at work? I’m not even supposed to be smoking here!”
We both laughed.
After the shoot (which actually lasted 45 minutes), he proceeded to review every single picture and deleted many that he thought were off-narrative. His favourite however, was one that I asked to take just as he was about to change. On seeing it, Moshood quickly went through his phone and showed me a picture of Al Pacino as Michael Corleone in the scene where his brother Fredo is killed. The shot was taken of Al Pacino through a glass wall and you could see his character subdued by the weight of his decision. “That’s what I mean when I say uneasy lies the head! You are amazing!!!!”
After we wrapped, Moshood took a few pictures of me and I must say, he has an artistic eye and a penchant for capturing leading lines. Afterwards, he took me to Terrakulture’s Art Gallery were we discussed Nigerian artists, passé motifs and poverty porn. “There is someone I would like you to read though- Binyavanga Wainaina, How Not to Write About Africa.” Then he excused himself.
He didn’t say goodbye! 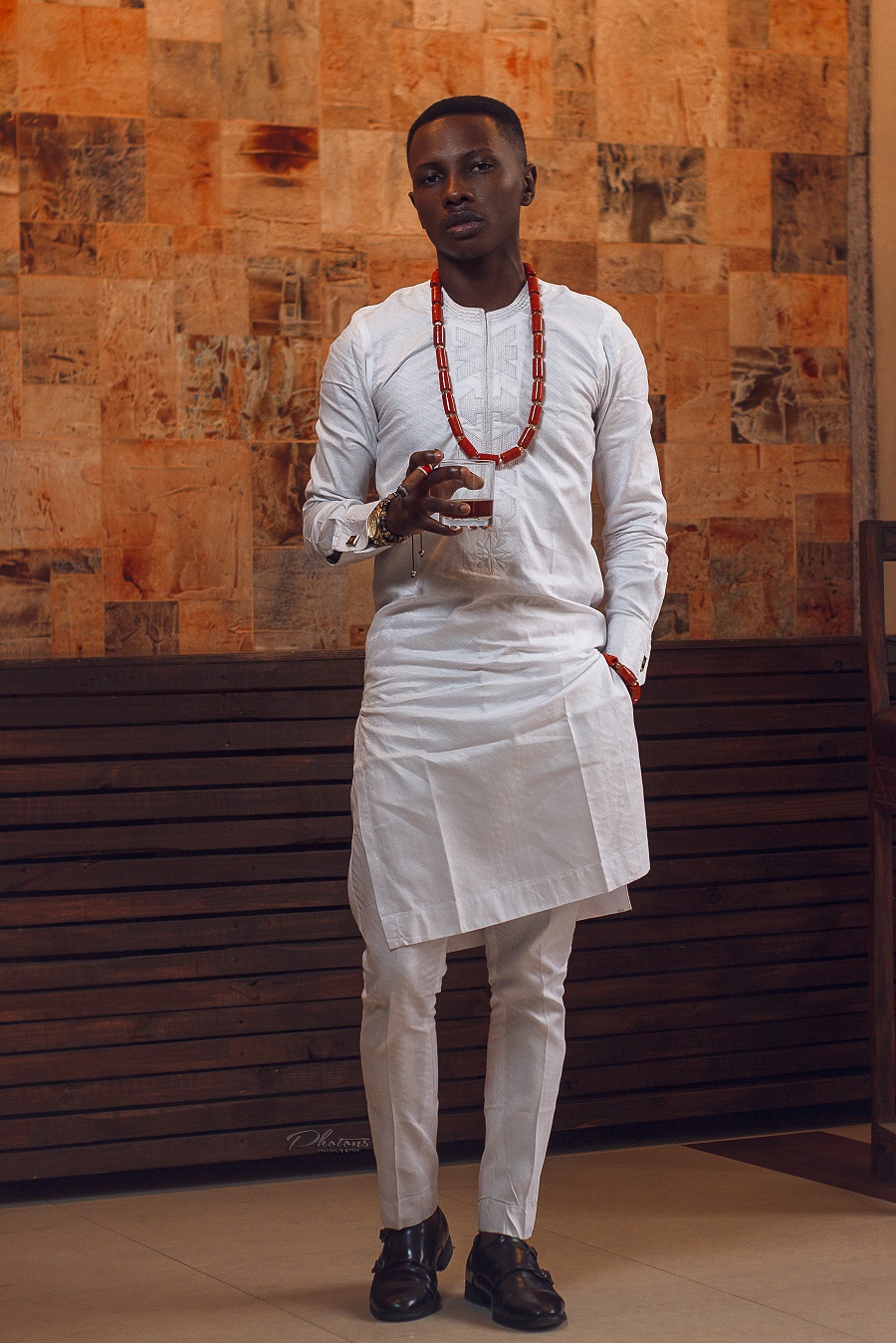 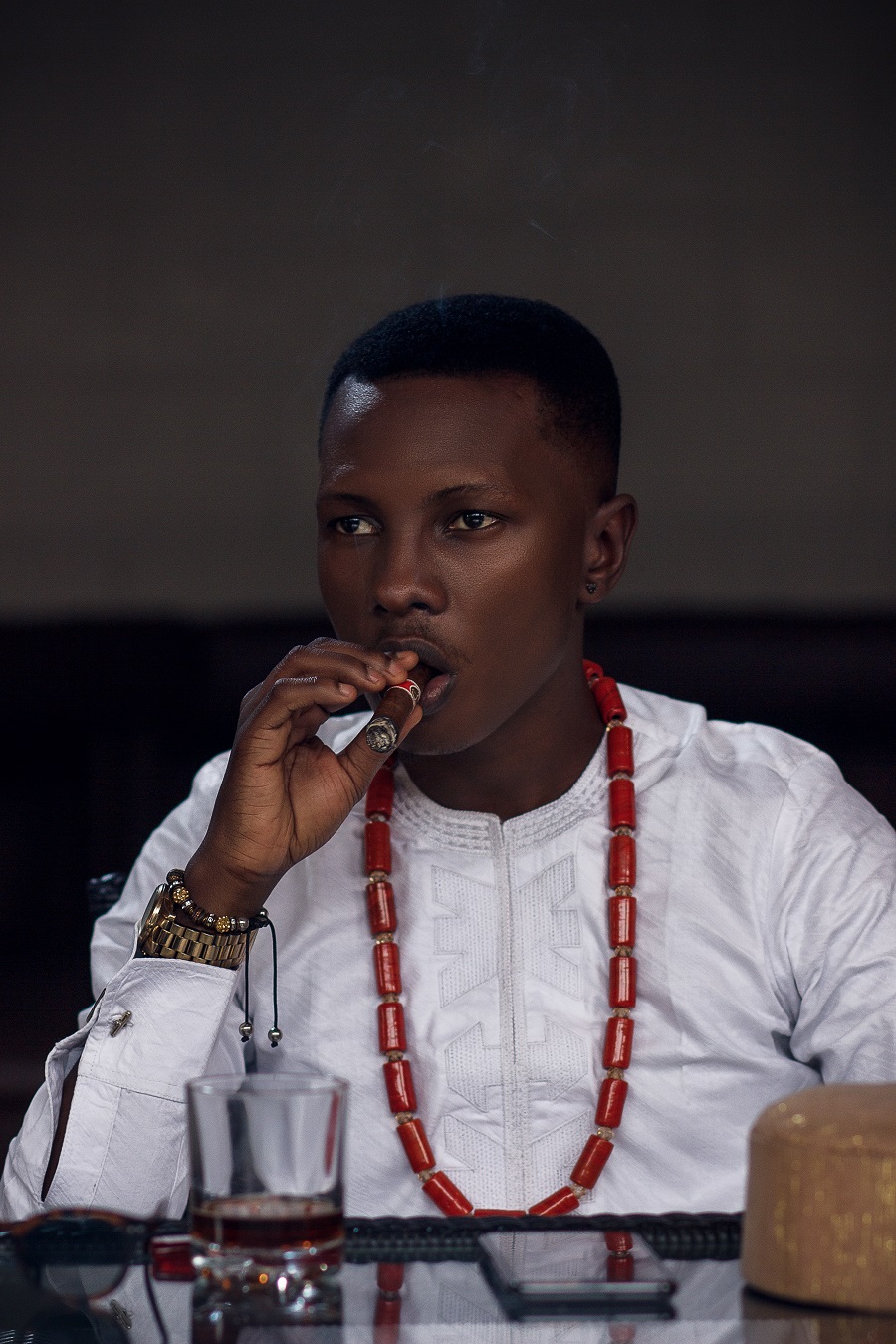 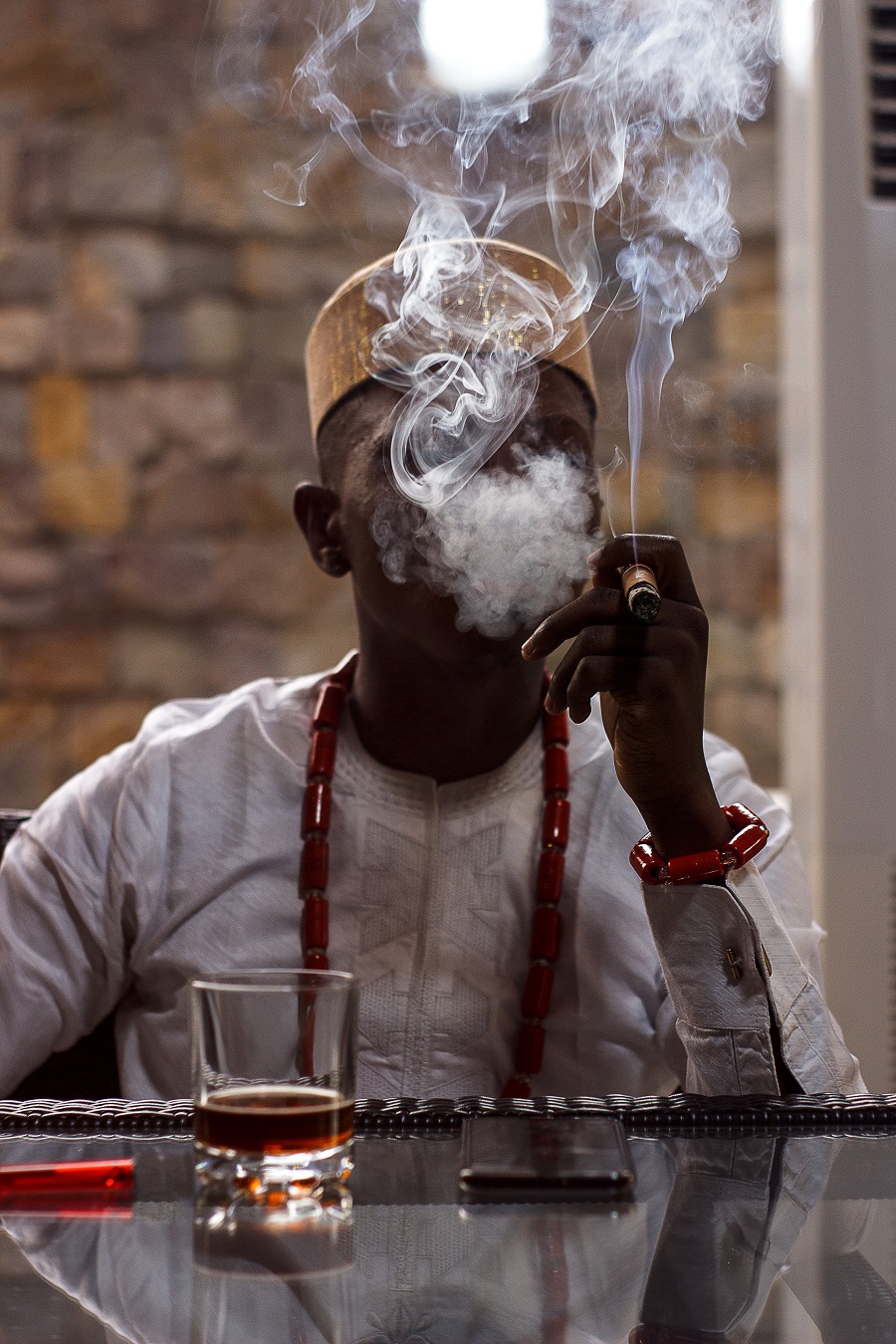 Ìyínkàyé Òrẹòlúwá | @photons_photography –
is a Lagos based portrait/lifestyle photographer & cinematographer whose conceptual art images have been transformed into hyper-realist paintings by some of Nigerias finest painters. He is a graduate of Computer Science from the National open university of Nigeria and mentee at the prestigious Nlele institute. Ìyínkàyé is passionate about exploring and preserving Yoruba culture and Ifá religion.
Moshood Fattah | @moshoodfattah –
is an actor, writer and art enthusiast. A graduate of Performing Arts from the University of Ilorin, he also has a Master’s Degree in Theatre Arts from the University of Lagos. His acting credits span theatre, film and television, some which include; Man Enough, Fishbone, Gandhi the Musical, The Johnsons, Fela & the Kalakuta Queens, Moremi the Musical, For Old Time’s Sake and The Butcher & the Bridge. In 2019, he was nominated in the acting category at The Future Awards.
Categories: Culture, Specials
Tags: Moshood Fattah

Obituary: Dan Foster, the American who changed the face of Nigerian radio forever

In the afternoon of 17, June, news would begin to filter in from unconfirmed sources that popular Nigerian based, American ...

As part of YNaija’s coverage of the launch of Queen Sono, the first Netflix original scripted series from Africa, our editors joined ...