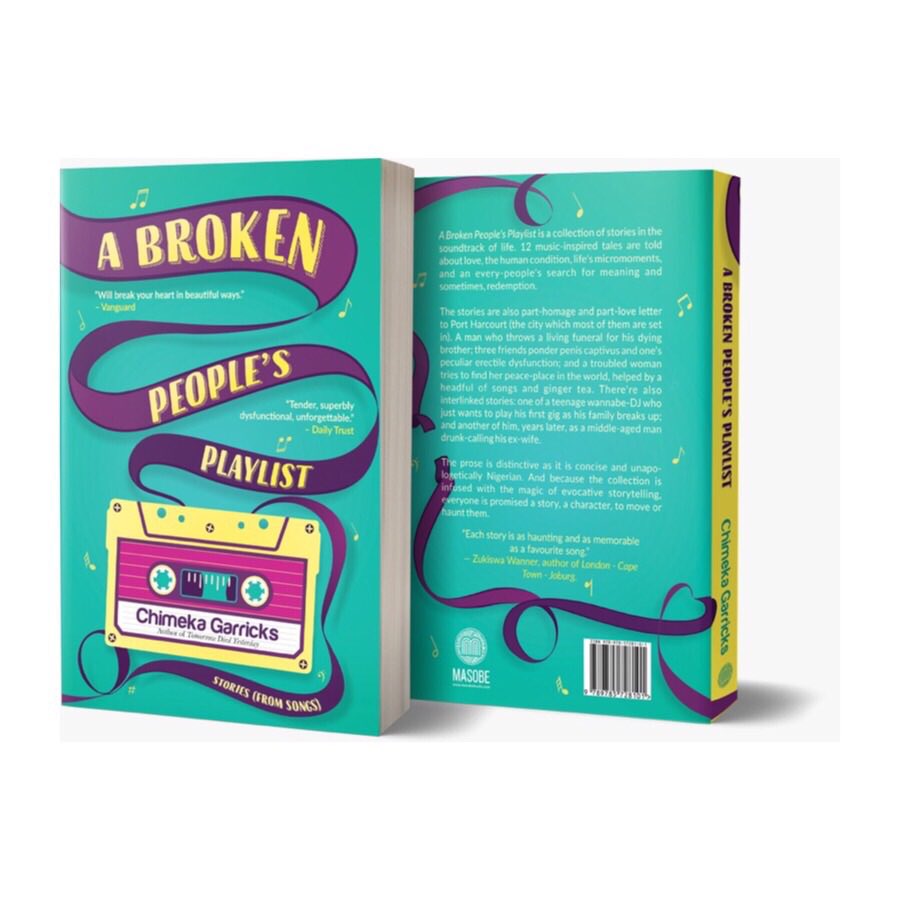 It isn’t the most original concept, melding music with words on the page. Countless authors have spoken of how at the heights of their creativity, or depths of their despair, music was the one constant, guiding them through empty screens, blank pages, muddled thoughts and eventually, creative highs.

Books and music have always gone hand in hand. Whether it is Mary Higgins Clark taking her titles from the great American songbook or Nick Hornby using his music inspirations as a crutch to deepen the male confessional in High Fidelity, the relationship has always been strong and symbiotic.

Almost ten years after publishing his debut novel Tomorrow died yesterday, a Port Harcourt set thriller, Chimeka Garricks returns with his first collection of short stories. To hear him tell it, the stories that make up A Broken People’s Playlist came to him while he was struggling to write his follow up novel. He suffered from a terrible case of the infamous writer’s block.

It wasn’t until he banged out a story of a DJ struggling to play his first gig while dealing with family drama, starring some characters from his now abandoned novel that he believed he could write fiction again. His inspiration? Lyrics from Erick Sermon and Marvin Gaye’s 2001 hit Music. It is also the title of the story. Matter of fact, the twelve stories that make up the collection are named for the songs that inspired them. So readers are guaranteed to come across familiar titles and popular songs.

Garricks’ playlist may be made up of cheesy pop songs, but the stories that he pens are made of sterner stuff. One or two of them lead to happy endings but for the most part he seems to be attracted to the darker aspects of the human condition. Like the book’s title suggests, the collection is an ode to troubled souls, drifters who have been dealt a heavy hand and insist on holding on to what makes them human in the first place.

Even though he lives in Lagos now, Garricks has retained an indelible affinity for Port Harcourt, the city where he grew up and as such, all of the stories are set in the garden city. He knows his city and he maps it pretty well tracking the relatable stories that play out behind gated mansions and on noisy street corners. This knowledge gives the collection a strong sense of place with the characters, diverse as they are, coming off as being rooted to the land.

The thing about music is that it finds a way to connect to people across miles, oceans, borders or even languages. When Maroon 5’s Adam Levine contributed the Oscar nominated song Lost Stars to Begin Again, a film about two troubled characters living in New York, he must not have imagined his lyrics applying on the page to two star crossed lovers in Port Harcourt. Lost Stars, the opening story is about a bittersweet romance thwarted first by pride and then by fate. In terms of mood and style, Lost Stars sets the mood for the rest of the collection as Garricks’ sharp, breezy writing, short chapters and universal outlook come into clear focus.

A Broken People’s Playlist houses life size characters seeking redemption or struggling to fill the giant-sized holes in their lives and some of the strongest stories bear witness to this. In the city is a stark, ripped from the headlines account of police brutality and hypocrisy that takes on even greater intensity now. I Put a spell on you is a delightful reclaiming of the classic standard, adapted to local realities. You are likely to alter your appreciation of the song going forward. Beautiful war is an insight driven examination of a marriage on the brink.

The stories appear unrelated for the most part but some characters are recycled, appearing as supporting players in multiple stories even as they lack the urgency of leading theirs. At least two stories are sequels in some way even though they still manage to work as standalone entities. And in a refreshing twist, for the closing entry, Garricks brings back characters from his debut, establishing a sort of literary universe where interconnected characters jump back and forth.

Too bad that this entry, You suppose know is one of the collection’s weakest. It takes an off-the-path premise, examining romantic love among senior citizens- the collection is peopled elsewhere by young men and women. But what could have been a refreshing gaze at the dynamics existing within an older couple’s relationship and the challenges of aging together is boggled down by clunky writing and eyebrow raising dialogue.

The author’s playlist may be needing some update but Garricks’ sturdy writing, sharp observations, heightened storytelling instincts and knack for drawing up relatable characters ultimately tilt the odds in his favor.