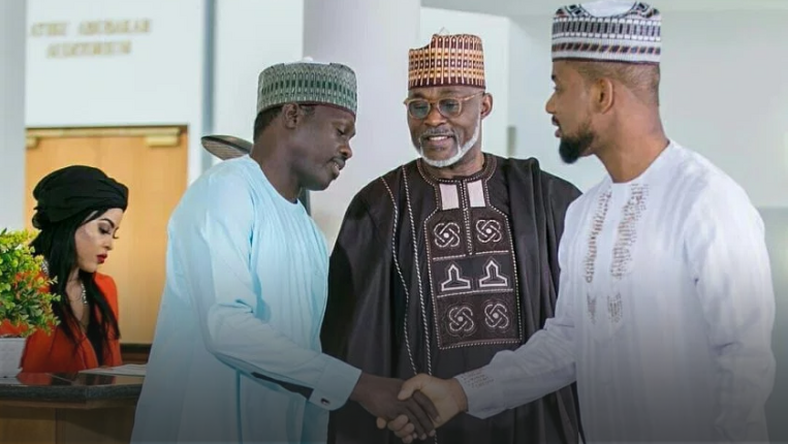 Forget everything you saw in Lionheart.

When in Nollywood, a young man returns from the United States of America to take control of his late father’s business empire- because God forbid his widowed mother should ever be considered to take on such a responsibility- you can assume that his ride going forwards would be anything but smooth. There must be something fishy about the business’ finances. That uncle who steps in to help with the transition must have a sinister motive. And the poor, unassuming hero is sure to be circled by vicious hawks swooping in for the kill. Trouble everywhere.

In Zero Hour, the latest contribution by 30 Days in Atlanta and A Trip to Jamaica helmer, Robert Peters to the Nollywood canon of shlock, young Zamani (Alexx Ekubo) arrives Abuja after spending his formative years in the states. He is welcomed like a prince and handed the keys to his family business, the money-spinning Galaxy limited by his ever-helpful uncle, Alhaji Danladi Davou (Richard Mofe-Damijo). One has seen enough movies to estimate that nothing is quite what it seems.

It isn’t quite clear what Galaxy produces or trades in but the company appears so successful, it has even launched a give-back-to-the-community service headed by employee Zainab (Rahama Sadau, phoning it in as per the usual) to empower youth corps members.

Zainab is engaged to be wedded to another Galaxy limited top shot, Awwal (Ali Nuhu, still unable to convincingly do more than read lines on screen) but isn’t above encouraging the affections of Zamani who happens to be cousins with Awwal. The screenplay immediately makes it clear that there are tensions between Zainab and Awwal and thus a happily ever after isn’t to be expected here. Zamani is free to swoop into further muddy the waters. He does exactly that.

Beyond plotting for the affections of Zainab, Zamani has a few other pressing challenges to worry about. Galaxy’s employees keep on dropping dead mysteriously and a pattern begins to emerge, albeit laughably. In trying to make sense of these mysteries, Zamani and Zainab bond over their fascination for sleuthing tricks. None of this is in the least bit exciting. Matter of fact, if one were to skip Zero Hour and turn on the television, at least one variation of whatever Peters was trying to replicate in Zero Hour is sure to be showing on one of Dstv’s channels.

Zero Hour is simply someone’s attempt to copy Hollywood style action thrillers but without nuance or context or even the tiniest sense of imagination. It is a shame people have to pay to encourage this. The picture looks good enough, so do the costumes and make up. Choice of locations is appropriately lavish but almost nothing can save Zero Hour’s derivative writing littered as it is with stilted dialogue, multiple coincidences and convenient plot turns derived straight from cliché central. There is not one single minute where Zero Hour is believable. Neither is there a single original short in the admittedly compact running time.

Produced by television royalty, Rogers Ofime (Tinsel, Hotel Majestic) Zero Hour’s writing is so derivative, one can smell the plot twists from a mile away, each one landing predictably and without much effect. But even this would be endurable if the actors were at least invested in the material. Only Eucharia Anunobi who has a small role as a foil to Zamani’s business interests stirs up a hint of excitement. Granted this has more to do with her magnetic screen presence than actual acting capability.

It is counter-productive piling blame on the actors though. Meryl Streep would be severely challenged by material as bland and derivative as this.