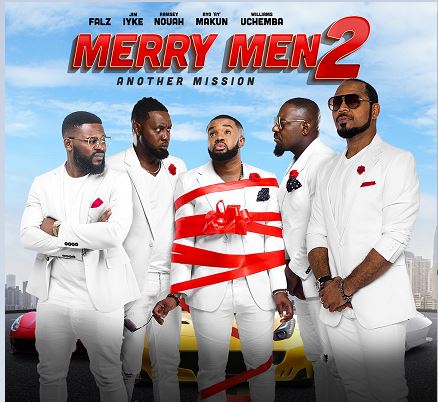 The most bankable star in Nollywood, a year removed from the box office success of his franchise opener, Merry Men: The Real Yoruba Demons, returns with the sequel you definitely didn’t ask for but knew was coming anyway. AY Makun is after all the man who has made three films- with a fourth in the pipeline- off the gimmick of a single character galivanting in a different city of the world.

Merry Men 2: Another Mission reunites the central foursome of Amaju (AY), Ayo (Ramsey Nouah), Naz (Jim Iyke) and Remi (Falz), the Abuja high rollers with a taste for high drama and a knack for living on the edge.

The events of Another Mission pick up from where the original film left off. Some of the guys are making life adjustments, in love and in life. Naz is now a husband and potentially an expectant father after tying the knot with Kemi (Rosaline Meurier). Ayo is planning a wedding with his heartthrob Dera (Damilola Adegbite), a law enforcement officer and adjacent member of the squad. Amaju is finally free from the clutches of disgraced former minister, Dame Maduka (Ireti Doyle) and is back to his philandering ways. This for him translates to picking up ladies at bars, getting shit faced while hoping to score a threesome at the end of the encounter. Remi remains Remi, socially awkward and emotionally unavailable.

Another Mission is another AY money grab-complete with copious product placement- but the screenplay by Anthony Kehinde Joseph is at least capable enough to provide some character development. It isn’t merely another rehash of the first film- actually sometimes it is- but the writer understands that for the franchise to work, the characters should at least be seen to be moving from point A to point B. Ayo and Dera’s wedding doesn’t quite materialize in this sequel but the inevitable entry that follows will surely accommodate it.

The opening scene is competent, exciting even as director Moses Inwang, taking over from Toka McBaror stages a scene that has a group of clandestine female operatives spring a convicted felon, Zara (Ufuoma McDermott channeling Fast 8’s Charlize Theron) from the clutches of the police. Zara’s skills are needed by the ever-scheming Dame Maduka, part of her grand plan being to manipulate the merry men into getting her out of her predicament. The merry men are attacked and at least one of these, involving a figure hunched over playing the piano while mayhem is staged in the background is visually appealing.

There is little that is original about the Merry Men franchise and Another Mission plays like another low budget imitation of Hollywood’s The Fast and the Furious franchise. Which is exactly what it is. Instead of focusing on the random car chases like the first film, this one chooses to explore further the familial bonds that keep the relationships afloat. Thus, the actors are placed in situations that require demonstrating some vulnerability. Except the gears are shifting too quickly for any of it to truly register. There is a particular (underrated) skill set that comes with putting together a successful action caper and Inwang tries his best but he simply doesn’t have it in him. His style is erratic, swinging wildly between self-assured and overwhelmed. The latter occurring even with basic human interactions.

AY is easily the film’s weakest link as he does not hold up the comic end, resorting to recycled jokes and social media trends that have been given life elsewhere. No one expects him to do any heavy lifting acting-wise but it would have been nice if he had at least learned by now to be comfortable with the camera. Enlarging the film’s cast means everyone has less to do and for AY, Falz and even Nouah, this may actually be a good thing. McDermott and her band of ladies (including Nancy Isime, Regina Daniels and Alex Asogwa) make for a welcome addition as they introduce some counterbalance to the adrenalin surge. With AY finally accepting his fate as an unfunny funny man, he enlists Williams Uchemba, an influencer whose tomfoolery is better harnessed in Kayode Kasum’s Sugar Rush. Uchemba manages to squeeze out a few laughs though.

For durability, it might be wiser for the Merry Men franchise to simply forget about being funny and lean into its potential as a thrilling action spectacle. Instead of turning to bland jokes for filler, AY might want to consider increasing the capacity of his collaborators- directors, screenwriters, stunt people- to deliver good old testosterone-fueled goodness. Cars, guns, babes, bombs, fight scenes. That’s what the series is good for anyway.