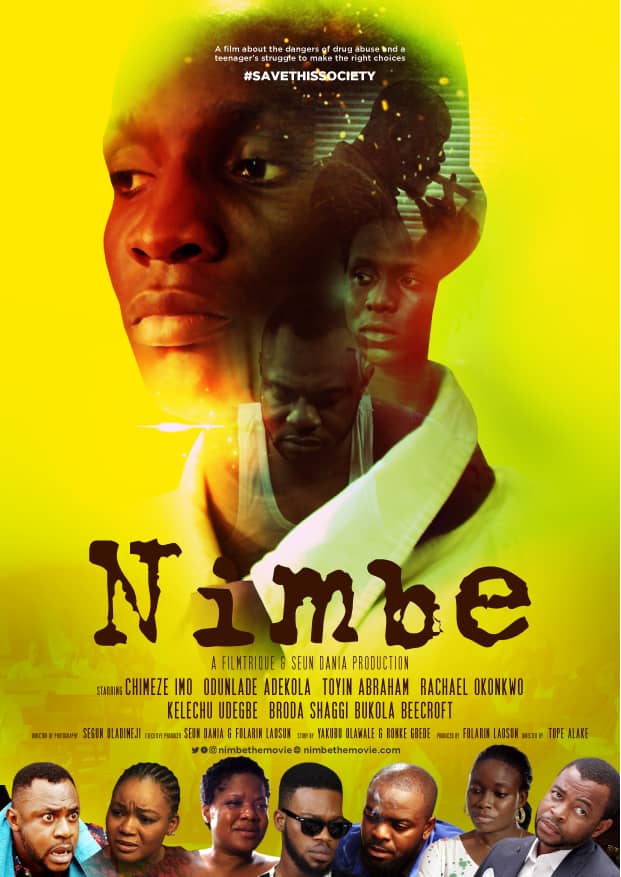 Film Review: Nimbe assaults you with overt moral lessons, but isn’t that all of Nollywood

The protagonist for which Nimbe: The movie is named after is a high school student growing up somewhere in southwest Nigeria. Nimbe is the kind of character usually ignored by mainstream Nollywood. A teenager from a troubled home who succumbs to addiction to a particular vice while searching for release from the pressures of a hostile home environment.

Portrayed with an affecting sincerity by Chimezie Imo (Kasala), Nimbe is a regular kid finding himself and his way around a tough neighborhood. The only child of his parents, Nimbe’s grades are good and he appears to genuinely enjoy the academic routine. For him, school is an escape from the toxic environment at home where he and his mother are constantly at the receiving end of an abusive father played by Odunlade Adekola. Battered emotionally and mentally by his father’s abusive behavior, Nimbe is neither assertive nor physically capable of fending off attacks from school bullies.

Nimbe: The movie wants to tell the story of the galloping drug epidemic that haunts a wide proportion of the country. In many ways, this story and the lack of attention it is currently receiving at policy and prevention level is one of the saddest failures of modern Nigeria. But attempting a large scale treatment is a daunting task that no two-hour film can conclusively hope to achieve. So the screenplay by Ronke Gbede and Yakubu Olawale wisely decides to localize it by considering the most affected sub-population.

As the film progresses, it is clear that director Tope Alake is also concerned with the immediate and remote factors that would ensure that these substances get to end users like Nimbe. So the screenplay accommodates a parallel storyline involving kingpins and middlemen like AK (a menacing Kelechi Udegbe) and Abu (Sani Musa Danja, laughably hyperactive). Nimbe: The movie traces how both worlds collide using moderate pacing, clear production design and effective world building.

Nimbe’s life takes a dramatic turn when he meets up with Ralph (Molawa Davis), a schoolmate running from demons of his own. Both outsiders strike up a friendship that is fueled by their gradual mutual dependence on drugs of abuse. Each character in Nimbe: The movie is an attempt to personalize the traumatic effects of the illicit drug trade.

Perhaps too much attention is paid to the relationship between Nimbe’s mother, Uduak (Toyin Abraham) and father, Bayo. Both actors are usually given to moments of overexpression and directors with a poor grasp of their material are always eager to accommodate them. Alake lets them babble on for longer than necessary but manages to squeeze a frenzied performance from Abraham that is nearly ruined by an inconsistent Efik accent.

Every once in a while, Alake breaks through Nimbe: The movie’s routine storytelling with some flourish that hints at more exciting work in the future should the inspiration find him but for the most part he plays it Nollywood safe with copious amounts of dialogue, a made for television sensibility and the need to drive home a message.