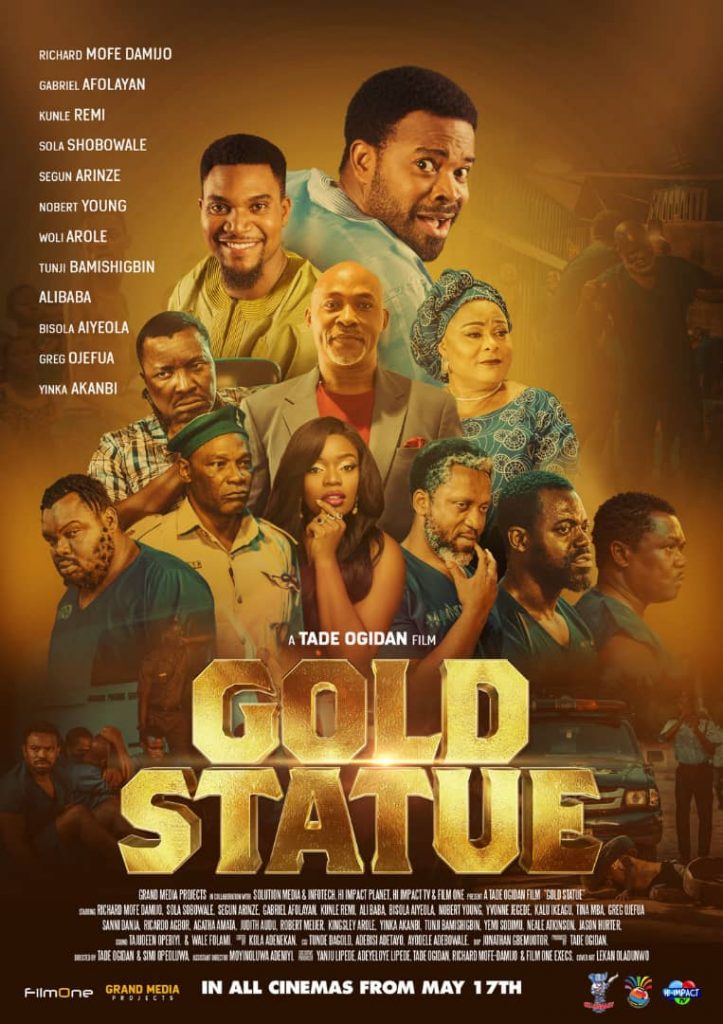 Film Review: Tade Ogidan mastered video, but Gold Statue shows he is yet to find his cinematic voice

When it comes to Nollywood movies, the name Tade Ogidan is about as iconic as it gets. Since he put a helicopter in an audacious chase scene in the 1996 action thriller, Hostages, Tade Ogidan has been synonymous with a certain amount of quality, making ambitious films miles removed from the average Nollywood output of the nineties and oughties.

The impact of his work looms large. Tade Ogidan made Bimbo Akintola a star in Out of Bounds (1997), made Liz Benson scary in Diamond Ring a year later and elicited career best work (at the time) from Ramsey Nouah in 2004’s Dangerous Twins. One of the early adopters of special effects at a time when they weren’t exactly common place, Ogidan did some forward looking work on films like Raging Storm and with others like Owo Blow and Madam Dearest, was able to influence the culture with his singular voice.

While the bulk of his most influential work arrived on video; the little seen Family on Fire from 2011 was screened in select theatres- Gold Statue marks Ogidan’s second attempt at reaching a new generation who come to get their Nollywood fix on the big screen. Gabriel Afolayan (King Invincible, Tatu) leads a broad ensemble of new and old faces in this comic adventure that starts out smartly but soon spirals out of control.

Adewale Esho (Afolayan) is the restless scion of upper middle-class parents who bored by school, stays in class long enough to trace an exciting history lesson to his ancestral heritage in Ilesha, Osun state. Driven by greed and obsessed with the financial implications of securing the long missing gold statue, Adewale and his best buddy Chike (Kunle Remi)- with the help of a friend, Brian (Kalu Ikeagwu), stationed in the United Kingdom- trace the missing statue to a prison in Ilesha.

No maximum security facility is secure enough to fight off the determination of the trio, plus the expectant buyers domiciled in Dubai. $500 million Naira is literally at stake. They hatch a plan to infiltrate the prison walls and the execution of this plan is Gold Statue’s terrific opening scene. Adewale is caught at the scene of the crime and the mob swiftly appears to dispatch jungle justice. The make up team does fantastic work that is complemented by some smooth visual effects application and the sharpness of the picture.

Tade Ogidan’s still got it, it seems.

This is all before he gets carried away with his own hype and doubles down, opting to make use of unconvincing VFX to represent the prison exterior and Dubai location.

Leave out the technicalities for a bit and go back to what makes Mr Ogidan special, his mastery of the story form. From Owo Blow to Dangerous Twins, Ogidan has always had his finger on the pulse of the zeitgeist, spinning wild tales that always feel rooted in reality and within the times they arrive in, even when elements of the supernatural are introduced.

Gold Statue takes on restlessness among young people and briefly touches on the dissonance between youth and tradition. The constant tensions between Adewale and his parents, Adewale and constituted authority reflect this adequately. But Ogidan is interested in much more. Or less, depending on where you stand. As soon as Adewale lands in jail, Gold Statue goes Prison Break mode, but by way of Soul Plane and Adewale has to employ all his wits to convince his fellow prisoners to join him in his heist.

He meets a cast of colorful characters that help give Gold Statue a lot of its crowd-pleasing elements. From Filmone endorsed influencers like Woli Arole and Bisola Aiyeola (Filmone is co-producing as well as distributing) to frequent Tade Ogidan collaborators like Nobert Young and Tunji Bamishigbin, the film is quite busy, it is a wonder how Ogidan finds time to give shine time to each one of them. The idea is that everyone gets at least one scene to elicit a chuckle or two.

This rule naturally does not apply to Sola Sobowale who together with Richard Mofe-Damijo, reprises the Diamond Ring dynamic as parents of a troubled child. While RMD actually puts in some work for the first time in a very long while, Ms Sobowale is a different kettle of fish. Cast in a relatively small role, she doesn’t understand the need to fit in or play cool. Ogidan just lets her huff and puff for longer than should be required by law and by the time she’s done, she will tire even the most patient fans.

The same can be said of the film. Does Gold Statue want to be a thriller or is it more comfortable flexing comic muscle? The later instinct wins out in the end and while the screenplay has moments of comic gold, the end result is marred by repetitive scenes, too much talk, too little action and unfocused pacing. You know, the usual Nollywood video problems.

Then there is the cheating. Scenes that could have demonstrated rigor in the filmmaking process, such as one that could have shown how the prisoners are able to lift a ton of weight above ground are abruptly sidestepped. After the first hour, everything that is novel about Gold Stature has been played out and the film stumbles to an awkward ending.

But even in middling form, Mr Ogidan is a more energetic filmmaker than most; but Gold Statue is proof that while he may have mastered the video format, he still has to find his cinematic voice.