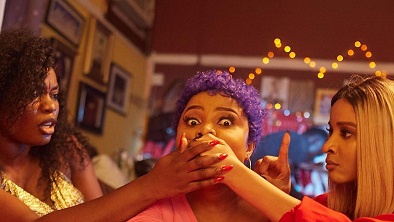 Film Review: The problem with Kayode Kasum’s Sugar Rush (and it isn’t the EFCC)

2019’s entry for feel-good movie of the year comes in the sleek-yet-sloppy, sickly-sweet packaging of Sugar Rush, the Kayode Kasum directed, star-studded, laugh-a-minute crime caper that has presently got the Economic and Financial Crimes Commission (EFCC) in its feels.

In the world that Kasum imagines for Sugar Rush, there is little faith in the Nigerian establishment and even before we meet the sisters who are at the center of the film’s narrative, the country has already taken from them while doing its best to deny them of the right to a dignified life.

Suzie is the eldest and the family’s empath although that doesn’t stop her from doing some shady deals to keep her head above water. Her talent is talking a good game, her targets are gullible, wealthy men who are interested in potions to improve their sexual performance.

Sola (Bisola Aiyeola) is the kind of wannabe that will paint red soles on her shoes to give off the impression of wealth and class even when her affect is saying otherwise. In this regard, she is kin with the family’s youngest, Bola who is on her way to achieving social media influencer status. Sola has a boyfriend, Andy (Tobi Bakre) whom she claims to love, but she is also constantly on the lookout for pervy, wealthy men to finance the lifestyle she considers herself entitled to.

In a strange coincidence, Suzie and Sola while going about their various hustles, discover they share a particular client. But that isn’t the most surprising discovery of the night. The sisters stumble on a crime scene and discover the sum of 800,000 USD in cash, just lying around waiting for someone to claim it. They make a split decision, to take the money and run. Except run for them means upgrading their lifestyle, spending big, throwing lavish gatherings, and let’s not forget, paying for mum’s treatment. In other words they do everything that will attract the attention of nosy financial crime agents. But as is detailed from the prologue scene, the EFCC isn’t the only party interested in retrieving the loot. A host of shady underworld characters are also looking to secure their cut and before long, the sisters become pawns in a criminal syndicate that stretches from the underground to the top echelons of society. It will take every bit of brains and brawn to play in these leagues.

Produced by Jadesola Osiberu (Isoken) with FilmOne executives sharing credit, Sugar Rush is the product of what can rightfully be considered filmmaking by committee in today’s Nollywood landscape. Find a script that has comedy as its backbone, fill the cast with familiar names and influencers alike, pitch it a certain way, at a certain audience and watch the money roll in.

It is hard to fault this approach when the end product is as genuinely entertaining- and engaging- as Sugar Rush. While other films that have fallen into this category tend to present the comedy, and perhaps the big-name stars as the only selling point, Sugar Rush dares to offer more even if it is more bark than bite, leading to a rollicking good time. It isn’t every time that you come across a screenplay that is both smart and stupid, thoughtfully cobbled together and yet totally uninterested in taking itself seriously. But this is exactly what Sugar Rush brings to the table.

Apart from her producing role, Jade Osiberu shares screenwriting credit with Bunmi Ajakaiye and is also responsible for the film’s production design. Anyone who has seen Osiberu’s work on the big screen and on television knows that she has her finger locked on pop culture in a way that her colleagues can only dream of. She also knows how to articulate her observations and present them eloquently in moving pictures. Sugar Rush is entirely of this moment but instead of lazily cannibalizing from the culture like recent outings by AY and Funke Akindele, Sugar Rush imbibes these influences and elevates them, contributing to and expanding the culture instead of just stealing from it. Case in point the casting of Toke Makinwa, the first and only time the OAP/influencer has ever been put to effective use on film.

Which is not to say that Sugar Rush lives up to its potential. Far from it. It is hard to ignore-or forgive- the condescending tone that the writers employ throughout the screenplay. With the wild plot twists and wilder plot gaps, with the nonsensical climax and the appearance of Banky W’s bullet shielding villain, Anikulapo, it is almost like Osiberu and Ajakaiye are mocking the audience with taunts like “We are definitely smarter than this, and we know this does not make any sense, but our research has shown that this is what you people like so we shall give it to you anyway.”

Sugar Rush may look like a Jade Osiberu film- bright colors, fun dialogue, aspirational production design- but a lot of the credit must also go to Kasum, a director who has made all kinds of films from the forgettable (Dognapped) to the promising (Oga Bolaji). Even at his lowest moments, Kasum has always displayed a vim for off the wall, goofy storytelling and while his visual language is still yet to be formed, he merges quite smoothly with Osiberu’s establishment antics, holding up the technical and creative ends.

The result is a toothless film that doesn’t quite commit to anything beyond delivering solid laughs at the speed of a mile a minute. Like the title suggests, Sugar Rush will leave you with a temporary burst of energy. Just don’t expect anything more sustainable.

Coming on the heels of the addictive Queen Sono, Netflix continues to ramp up its presence in Africa with the ...