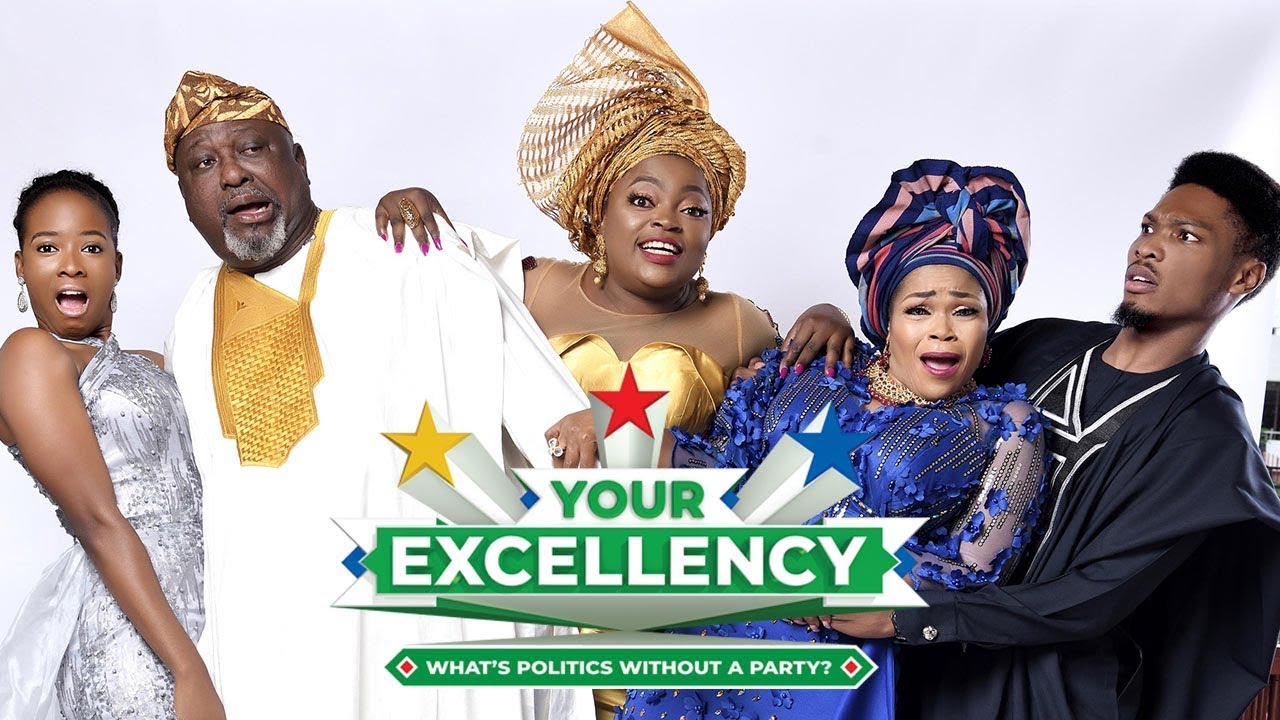 Film Review: Your Excellency is an embarrassing misfire

Consider this for a moment. You are a business mogul operating one of the most profitable film studios in all of Nollywood. You deliver a luxury edifice in one of Victoria Island’s busiest and wealthiest business districts. No mean feat. To open the property, you invite the Governor of Lagos state. You also invite business partners, captains of industry and the showbiz elite to a glamourous evening of celebration and networking. You use the opportunity to premiere your studio’s latest film, a would-be blockbuster that has politics as its central theme. You sit all these high net worth individuals down in a cozy ambience.

Then you show them Your Excellency.

Whatever happened to inspiration? Or good taste? Or basic entertainment value for that matter?

If you have seen Your Excellency– and there’s a good chance that you have, considering it recently just crossed the 100 million Naira mark after only three weeks of release- you understand why the scenario painted above is disturbing. If you haven’t, a breakdown.

Your Excellency is a political comedy that revolves around the Ajadi family. The patriarch Olalekan Ajadi (Akin Lewis, perhaps the film’s sole success story) is a typical money miss road, a fellow so stupendously wealthy, he has no idea what to do with his money. The film does not really explain the source of this wealth, but we’ll assume he is a business type.

Obsessed with the United States of America’s Donald Trump, Ajadi has become a serial presidential aspirant. The kind that operates on the fringes and no one takes seriously. His first wife Laide (Shaffy Bello, stuck in typecast purgatory) has repaired to London where she can hide away from the constant embarrassment of his serial attempts. His second wife Kemi (Funke Akindele) a former actress, pretty much tolerates his political adventures, as long as they don’t threaten her comfy lifestyle.

By some miraculous stroke of luck that can only be aggravated by social media, Ajadi becomes a frontrunner and aspirant of a major political party. Then the hawks swoop in.

It seems like an interesting enough story but everything about Your Excellency’s execution falls miserably flat. Helmed by Funke Akindele-Bello, a beloved movie and television star making the transition to directing on the big screen for the first time, Your Excellency runs into trouble from the very first scene.

This scene is an establishment shot, of the house where the bulk of Your Excellency’s action takes place. It is one of those baroque Lagos Island houses that have become de rigueur in Nollywood films such as this. It should also look good on screen in the least. Toka McBaror’s cinematography- or lack of- picks up on the angle that doesn’t exactly flatter the house and then shoves it right in our faces, without style or grace, or any sign that someone has put in some introspection. This shot is a metaphor for the rest of Your Excellency.

Funke Akindele made her bones on television and the small screen will always be the medium that suits her exaggerated tendencies the most but even that is no excuse for the uninspired shoddiness of Your Excellency. From the unconvincing all-star cast deployed to the lazy screenplay credited to Yinka Ogun and cluttered framing of pictures, it seems like no one on the set of Your Excellency has a basic understanding of making pictures for the big screen. There isn’t one interesting shot in the entire film, not one stimulating moment and the laughs do not come fast enough to justify the entire experience. Akin Lewis gives it a shot and presents Lekan Ajadi as a bumbling tool. The chemistry he shares with Akindele-Bello is perhaps the only redeeming factor that Your Excellency can boast of. But even this is threatened constantly by Akindele-Bello whose occasional vacant, absent-mindedness gives off the impression she has other things on her mind.

To stretch the running time, an underwhelming subplot is introduced with Alexx Ekubo and Osas Ighodaro slumming it out as Kachi and Candy, a reality television starring couple going through a marital crisis too trivial to matter. If this relationship is meant to be contrasted with the Ajadi’s so that audiences can derive some life lessons on keeping relationships 100% real, the idea fails miserably.

When presented with decent enough material, Ekubo and Ighodaro can rise to the occasion as actors but Your Excellency leaves them so stranded, you can practically feel them fighting for air amid the recycled jokes and cringey lines they are handed. The same fate befalls Toni Tones who was so surprisingly effective in last year’s King of Boys. Her character actually has the most purposeless arc and she has no way of rising above.

Somewhere within all of the clumsiness, Your Excellency wants to comment on the overwhelming influence on social media on every aspect of today’s living but this critique isn’t translated clearly and the range of Akindele-Bello and her team is clearly limited. Little flourishes creep up where plot points are updated via social media posts but even this is far from innovative. There is simply no depth to the film.

Industry observers have been quick to describe Your Excellency as a film that knows what it is about. That the film’s primary purpose is simply to vacuum viewers money over the holiday period- a legitimate observation considering EbonyLife Film’s four-year history. Some critics have agreed too. Why bother critically with a toothless film when it is naked about its own ambitions?

The problem with this take is that it tends to downplay any rigorous analysis regarding the film’s merits and provides filmmakers with impetus to continue to put out least common denominator attempts like this in the name of aiming for blockbuster status. Nothing wrong with having big money ambitions but films that aim for this should at least be willing to put in the work to give audiences value for money. At the very basic level, a film like Your Excellency should be entertaining enough to cover up for other lapses. This thrill factor is what the likes of Fifty, the first Wedding Party and even Chief Daddy managed to deliver. Your Excellency simply doesn’t cut it in this regard.

PS: If you are wondering why those who attended the launch of the EbonyLife Place chose to talk about the lavish building, the boutique hotel, the rooftop terrace, the steep prices- in other words, anything but the two hour film they just sat through- there you have it. There is very little to write home about.