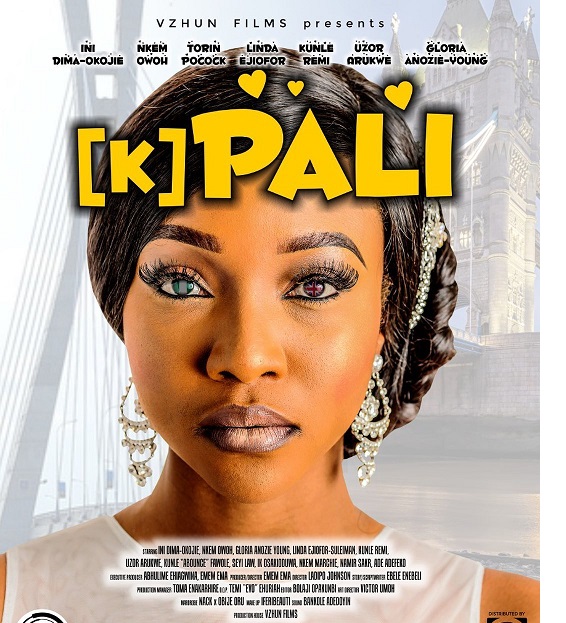 The heroine of Kpali, the new romantic comedy coming to theatres on the 20th of December is Amaka, a winsome young adult played with sufficient amounts of charm and sass by Ini Dima-Okojie.

Amaka resides away from her family, in the United Kingdom where she works as an investment banker. It is a cozy enough gig, her job. One that keeps her connected to the continent but far away from her well-meaning but bothersome family. Her mother (Gloria Anozie-Young) is a tad overbearing. Father (Nkem Owoh) does not quite understand the concept of personal space. And her about-to-be-wedded sister (Linda Ejiofor-Suleiman) is lovestruck to the point of being insensitive. Little wonder Amaka prefers the distance and sanity that London represents. In an early scene, she converses with her parents via Skype and the conversation sharply drifts to the very consequential matter of marriage. Kpali is that kind of film.

In an attempt to distinguish itself from the regular template of single woman finding her happy ever after just as she is about to give up and pack it in, Kpali introduces its inciting incident early. After an unimpressive workplace evaluation, Amaka is dispatched to Lagos to drum up profitable business deals for the firm. She has only thirty days to do so as her work visa expires immediately after this period, to be renewed by her office, only upon proof of performance.

Amaka lands Lagos with her Caucasian colleague, Jack (Torin Pocock) and for considerable stretches, Kpali adopts the airs of a comedy of errors. Cue the interracial jokes, the forced bonding between work colleagues and the tired jokes about Nigerian food. There are shrewd observations to be inferred from Kpali, some of which include casual and overt racism, toxic work spaces and the eternal indignities of immigration but Kpali takes extra care to avoid direct political discourse. At its heart, Kpali is an unchallenging addition to the romantic comedy subgenre and is quite comfortable playing in this space.

Amaka isn’t in Lagos for long before the complication of Jidenna, a dashing young suitor played by Kunle Remi is introduced. She is soon faced with the very awkward prospect of making a suitable choice, not just in a romantic partner but with work and family as a whole.

Directed by Ladipo Johnson, Kpali– named for the colloquial term for immigration documents- tracks its events closely within those 30 days, making use of the time cards to introduce the element of urgency that Amaka is apparently dealing with. This decision makes sense and should work on paper but on screen, the choppy editing does not quite match up with the speed of the actors and this constant lag gives the audience the impression of watching a half-hearted attempt at a sitcom.

The chemistry among the actors is key to Kpali’s appeal. The cast will not win any major awards but everyone looks like they are genuinely having fun. The comic timing is as sharp as it gets and Ini Dima-Okojie who has excelled in comedy back in 2016 with Aniedi Anwah’s It’s Her Day appears to have retained all of her comic instincts. She faces off with Nkem Owoh and lives to tell the tale. Not every actor can claim that. This compatibility and ease among the cast proves useful as it helps audiences navigate the kinks in Kpali’s filmmaking.

Shot on location in London and Lagos, Kpali, produced by Emem Ema’s Vzhun films should work as familiar, relatable programming for the Christmas holidays. It won’t wow you with any technical prowess but if you let it, it just might charm you with some of its wish fulfilment. Love and complete immigration documents in a time of Donald Trump and Brexit. What’s not to like?