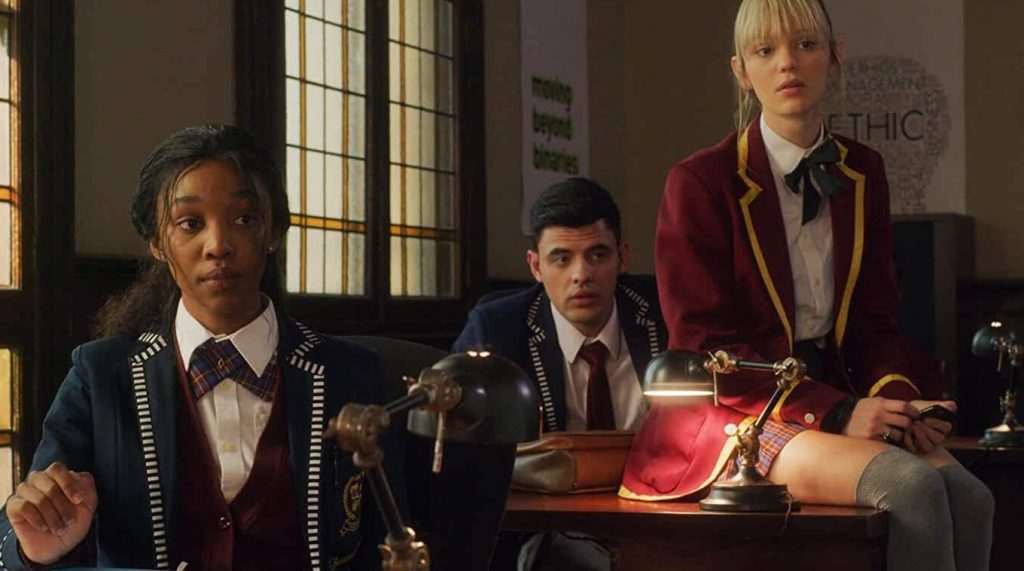 Coming on the heels of the addictive Queen Sono, Netflix continues to ramp up its presence in Africa with the engaging but often frustrating young adult series Blood & Water. Debuting on the streaming platform in May, Blood & Water is Netflix’s second (South) African original series and carries with it some of the features- improved budget, great cinematography, socially conscious themes- that made Queen Sono so wildly entertaining.

In the opening scene of Blood & Water, one character is dealing with some kind of displacement. We sense this from the way the camera, placed in an upside-down position, introduces her lying on the bed, and then switches itself right side up as she sits up. By the end of the series, another character will literally have her life turned upside down and the trusty camera upends itself to capture this significant moment.

Between these two striking scenes, showrunner and director Nosipho Dumisa alongside her team of co-writers and directors Daryne Joshua and Travis Taute, in six uneven episodes unspool an intriguing story of love, loss, family and the ties that bind.

The quietly macabre introduction of Blood & Water has a seemingly happy middle class South African family celebrating the birthday of one of their own, complete with balloons, gifts, cake and a mother charging at her daughter with the words, “It’s a party not a funeral.”

The party, an annual ritual in the Khumalo household celebrates Phume, the firstborn daughter who disappeared from the hospital shortly after she was born, the unfortunate victim of a shocking abduction. For all of her life, thanks to her parents’ failure to find closure from the tragedy, the lead character, Puleng Khumalo (Ama Qamata) has lived in the shadow of her unknown sister. Following an act of teenage rebellion in which she attends a more conventional teenage party, one that is rife with drugs and horny teens, Puleng meets a stranger, Fikile Bhele (Khosi Ngema) whom she is immediately drawn to, convinced that she has found her long-lost sister.

The rest of Blood & Water attempts to solve this central mystery. Is this girl the missing sister? Striking out like a person obsessed- and indeed she is- Puleng wriggles her way into Fikile’s life and in search of proof, launches an investigation that will eventually have devastating consequences for everyone involved.

It is an interesting enough concept, this set up and while Blood & Water is a mystery, it is also a young adult drama set in the world of high school teenagers. As such the series takes a two-pronged approach, advancing the central mysteries with clues strewn in each episode but also delving into the interior lives of the students of the elite Parkhurst College, where most of the action is set. As a result, the usual markers of teenage ennui are highlighted repeatedly. Expect story beats that have to do with related territory such as bullying, gossip, jealousy and romantic entanglements.

Sometimes it feels like Blood & Water isn’t quite sure of its identity. There is some attempt at pushing the envelope re HBO’s Euphoria in terms of the maturity of content. While Blood & Water has its fair share of nudity and sexual activity, it is all still played a bit safely, as if the show cannot quite bring itself to go all the way even though it wants to stand out. Perhaps the writers want to eat their cake and keep it.

Like Queen Sono and loads of South African content that have come before, Blood & Water is just as interested in contemporary issues as well as the country’s traumatic history. So themes like kidnapping, child trafficking, rift between the haves and the have nots routinely surface. Eventually it finds its rhythm somewhere between young adult drama machinations and suspense genre beats, without actually mastering either one. The coincidences are a tad too pat and some of the plot turns are eye rolling but on a technical level, Blood & Water delivers the goods. Production design is eye catching and Zenn van Zyl’s confident cinematography plays with light, shadows and colors while capturing the stunning beauty of Cape Town’s spaces.

The cast is engaging and while the story is centered on Qamata’s Puleng, there is a solid ensemble to back her up. A good thing considering Qamata’s range isn’t quite as expressive to sustain interest in her character. Some of it isn’t her fault as the conflicts aren’t presented in the most arresting or realized of ways. If there is one thing the series’ first season does splendidly, it is setting up timely cliffhangers. By the end of the finale, viewers are likely to be screaming for more.

Good thing as a second season has recently been announced.