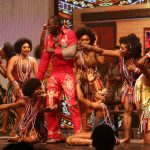 Another December, another Bolanle Austen-Peters extravaganza.

And how we have come to love them.

And why shouldn’t we? When it comes to bang for your buck, lavish high-end theatre productions, no one working in contemporary Nigerian theatre today has a bigger reputation for delivering the goods like the woman who reinvented the Lagos scene with the Terrakulture hub and space.

Fela’s Republic and the Kalakuta Queens, a musical adaptation of the colorful life and times of the late Afrobeat legend and cultural icon, Fela Anikulapo Kuti started in 2017 and has since gone on tour in South Africa where it played in the State Theater in Pretoria. Updated this season with a new name- to accommodate the show’s increasing interest in Fela adjacent characters- Fela’s Republic and the Kalakuta Queens brings back the principal cast from the debut production with Austen-Peters returning to oversee the production.

The music that Fela birthed, that heady, rebellious mix of jazz, funk, fuji and highlife known as Afrobeat has received acclaim from every corner of the globe and Fela’s legend has been assured for the longest time now. Not surprisingly, the same respect that Fela and his music commands has not been transferred to the women who can be described as partners in the creation of Afrobeat. These women supported Fela all the way, sang with him, danced with him and put their reputations on the line to be with him. Yet what is regularly cited about them in history books is the sensationalized part of their lives, particularly the episode where Fela married 27 of them at once.

Fela’s Republic and the Kalakuta Queens offers some kind of corrective and presents the women as living, breathing carriers not just of Fela’s burden but of their own quotidian struggles. Some of the musical’s strongest moments occur when Austen-Peters depicts the bonds between the women. Whether at peace or at war, the women are presented perhaps for the first time as independent, realized figures constantly dealing with the pressures of arriving way ahead of their time.

It would be unrealistic to zero in on all 27 women so Austen-Peters weaves the plot around a few of them. Funmilayo (Inna Erizia) the rebel leader, Laide (Dolapo Philips) with the identity crisis and of course, Malaika (Uru Eke), the foreign scholar who infiltrates the republic in the guise of studying the occupants- she is promptly dealt with and dispatched from whence she came.

The depiction of these relationships may be dismissed for the sexualization and overt reliance on petty rivalries that characterises the many encounters within the play. Anyone looking for scenes on how the music was made, or the nature of the actual contributions of the women to the music will have to look elsewhere. Fela’s Republic does not pretend to excavate such depths. Its primary concern is depicting the Kalakuta republic as a typical polygamous household complete with high drama, petty squabbles and other shenanigans.

Because this is also the story of Fela, real-world concerns must spill into the alternate haven that Fela created for himself. The government is uncomfortable with his music, armed officers consider raids on Kalakuta fair game and Fela’s record label, Decca is owing him royalties from his music. The women are with him through it all and while Laitan Adeniji’s Fela remains at the centre, the character has also been streamlined such that he isn’t quite the driver of the action and mostly reacts to the women’s lead.

As Broadway-inspired spectacle of music, lights and sound, Fela’s Republic and the Kalakuta Queens is a smashing winner. The show, separated into two parts by a ten-minute intermission casts a riotous spell from the opening notes. Austen-Peters is able to weave an episodic narrative out of Fela classics such as Lady, Beast of No Nation and Shakara.

The production design is lavish if not quite detailed as the props do not completely evoke the Lagos of the ’70-80s, the decade in which the play is set. Costuming led by Ituen Basi is a dazzling affair with colorful Ankara prints complemented by the obvious work of the hair and makeup team. The choreography is the icing on cake as the multi-talented cast of performers give the material their all, singing and dancing to the tunes dished out by the live band without missing a beat. Show-stopping original musical numbers are added in the second half and the performers are more than capable of bringing the big tunes to life.

Fela’s music will continue to remain relevant as long as Nigeria insists on punching below its weight. All of the themes Fela sang about are still pertinent today and the show even finds fun ways of bridging part and present. This means that from time to time, continuity is sacrificed for laughs.

Even with the name change, the fundamental drawback regarding Fela’s Republic and the Kalakuta Queens persists, carried over from the original production. This problem is the production’s inconsistent and mostly outdated gender politics. Despite touting itself as a pro-feminist performance piece, the show does not possess the range to truly explore the contradictions embedded in Kalakuta republic, as well as the ones that existed between Fela and the women. For instance, how does one marry the ladies’ sexual agency and readiness to confront constituted authority with the submissiveness that made it possible to share one man under the same roof?

The show’s embarrassing answer to these concerns is to package his wedding to the 27 ladies at the same time as some sort of act of benevolence that instantly conferred legitimacy on their claims. It is surprising how Kalakuta a place celebrated as such a counter-cultural environment would capitulate to heteronormative ideas. Even if such a contrast was possible, the production does not work hard at arriving there and just falls into derivative happy endings that betray its material.

But see Fela’s Republic and the Kalakuta Queens whatever chance you get because the show is packaged for maximum entertainment and delivers all of the thrills that it promises, maybe even more.