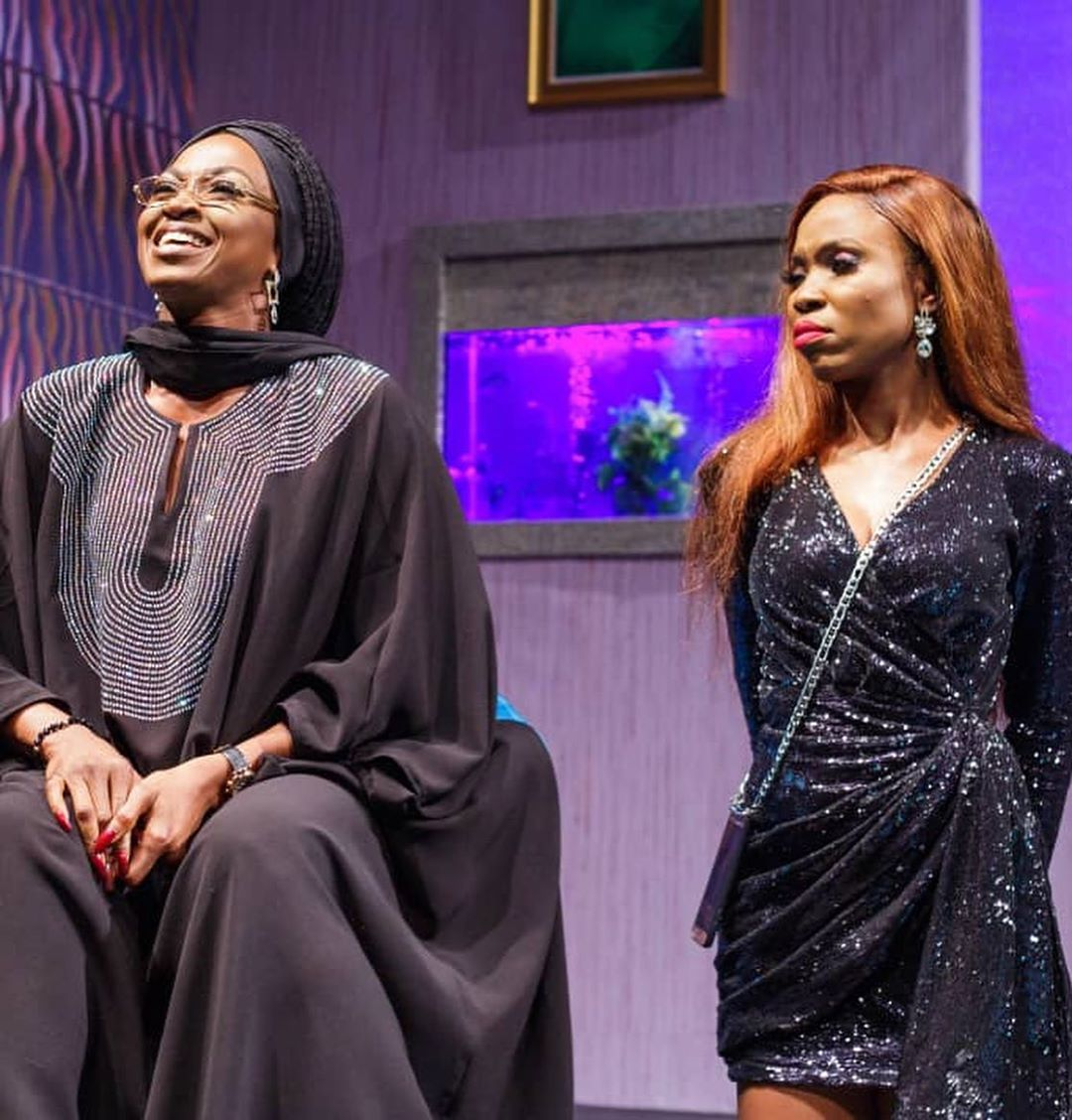 Theatre Review: ”The Wives” is a near perfect outing

Fresh off her stage directing debut with the dramedy, Lavender which premiered at the Lagos Theatre Festival in April, thespian Lala Akindoju returned to the stage on the week ending 5th to 8th September, this time at the Muson center, where she performed double duty, affirming her power in front of and behind the stage.

This time, Akindoju’s The Make It Happen production company presented another lavish, star studded adaptation of The Wives, the popular post-feminist drama written by professor Ahmed Yerima. It isn’t the first time that The Make It Happen productions would be mounting a revival of The Wives and at least four of the actors (Kate Henshaw, Jide Kosoko, Toyin Oshinaike and Akindoju herself) return from the 2014 production. All of them reprise their roles.

The entire play takes place in the living room of the now deceased chief Gbadegeshin Olowookere who during his lifetime, took advantage of his wealth and status to spin a spectacular web of deception around the four women in his life.

The Wives opens with the deceased’s sister, affectionately known as Aunty Mi. This time she is played by Binta Ayo Mogaji, the veteran player of stage and screen who is as adept in drama as she is in comedy. Needless to say that the role suits her like a glove as she nails the quiet desperation that settles among chronic dependents who have to scheme to remain relevant when a terminal event like death occurs.

Aunty Mi was chief’s closest confidant, omnipresent and omniscient, a considerable feat in an oft’ raucous polygamous household. Never married, she remained in her brother’s home where she was brutalized and then comforted by his largesse. Aunty Mi has seized control of the household as none of chief’s three wives quite have the capacity or skill to take charge and manage such a complex environment.

Angela (Kate Henshaw,) the first wife is weak and given to poor decision making. She may have loved her husband when they first got together, but after welcoming two other younger wives into her home, she is mostly just resigned, and self-preserving.

Cecilia (Shaffy Bello,) the second wife is the polar opposite of Angela. Independent and protective of her dignity, she found the will to leave the toxic environment and took her kids with her. She never quite looked back, rising to becoming the top female banker in the country. Feminist and fabulous, Cecilia only makes a return to his funeral to collect on a debt and atone for a moment of weakness.

Which leaves the youngest and trophiest of them all, Tobi, played with a dazzling comic energy by Lala Akindoju. With Akindoju at the helm, the role of Tobi has been enlarged and reimagined such that she becomes the livewire of the play. In previous editions, especially in the 2011 production directed by Kenneth Uphopho, there was little that was genuinely interesting about Tobi and a less seasoned Akindoju was merely going along with the character’s simpleton nature as outlined first by Yerima and then by her director. Tobi 2019 is different, or at least Akindoju envisions her differently. Yes she is still naive, still suffers from foot in mouth syndrome but she is a lot less stupid and Akindoju as an actress has grown along with her, injecting the character with a world weariness that creeps in and takes root almost without warning.

The appeal of The Wives remains in the timeliness and timelessness of the themes it expounds. The toxicity of the patriarchal system and the many ways that women are forced to navigate this culture remain front and center. The unbalanced power dynamics involved in these relations usually force women to adopt a delicate dance just to survive and perhaps Aunty Mi is the most elegant dancer of them all.

Which is not to say that the production is entirely about her. It is a high wire act that Akindoju achieves, balancing all of the actors- include a droll Jide Kosoko and an underused Toyin Oshinaike- and their character arcs such that most of them shine but none is quite more effective than the other. It is a tight cohesive unit suited for the play’s dramatic richness and Akindoju’s skill as a director is convincing. Her control of the material is solid and she makes fine work of it, save for the cluttered, improbable ending where revelations come spilling out with all the ferocity of a machine gun. In these moments the writing falls back on convenient twists to keep the plot going.

A little more room to boil, a little more nuance with Ahmed Yerima’s tepid handling of Chief’s sexual assault and coercion of Aunty Mi and The Wives (2019) could very well have been a perfect outing. It comes pretty close though.