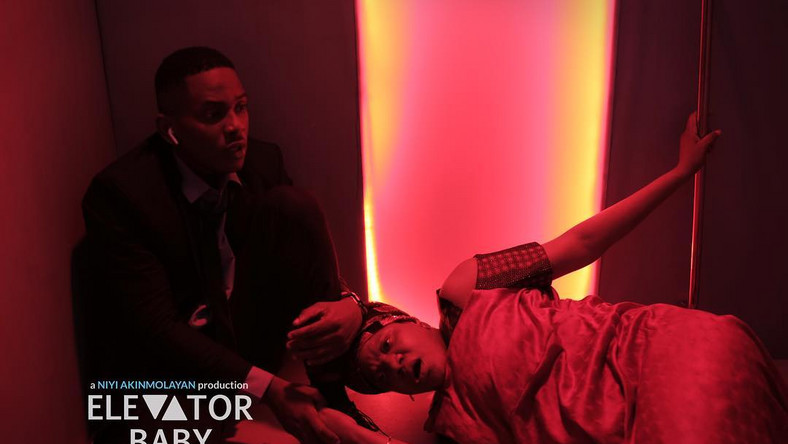 In Akay Mason’s Elevator Baby, sparks fly but is it enough?

What happens when a conceited young man, bloated with pent up frustrations is trapped in a faulty elevator with a brash pregnant woman weighed down by guilt?

That is the basic premise of Elevator Baby, the debut feature-length attempt by twenty-six-year-old Akay Mason. It is hardly an original concept, placing strangers in confined spaces and watching as they generate tensions and while Mason is no master with a uniquely original take, he finds a way to present a passable comedy that is sure to please fans looking for an unchallenging, feel-good fare.

Before the central duo of Elevator Baby find themselves trapped by one of the most common structural challenges responsible for limiting Nigerian productivity on a daily basis, some back story.

Dare Williams (Timini Egbuson) is a spoilt rich kid whose haughty countenance is masking a deeply troubled soul. In an early scene, Dare’s mother (Shaffy Bello) is up at some ungodly hour, beside herself with worry because her recalcitrant son has not deemed it fit to update his family while engaging in one of his night crawling sessions.

The matriarch is anxious, despite Dare’s established chronicity at keeping such late nights. To punish him for stomping on her affections, she does what the average movie mother in her position would do. She terminates his steady flow of income.

Humbled by a life without unearned unrestricted funding and challenged by his henchmen to dare to make a living without his mother’s largesse, Dare seeks out other dignified alternatives.

During his attempts at establishing independence, Dare collides with Abraham’s Abigail on an elevator. It isn’t exactly love at first but when a power outage keeps them trapped with no sign of help coming their way, they must learn to put their differences aside, especially as Abigail’s temporary guest threatens to arrive at a most inconvenient time. Thus, spoilt rich kid, scared out of his wits, must put aside his condescension to help bring a child into the world.

A film like Elevator Baby should be easy enough to put together, someone whispered. But that person hasn’t had front row seats to the movies Nollywood has been churning out of late. Elevator Baby works because of the unexpected chemistry between the actors who take on the central role. Actually, not so unexpected considering Toyin Abraham can be trusted to milk a response out of a rock. It also works because the director is focused on telling his story to the best of his abilities.

There are laughs sure enough but Mason’s film, inelegant as it is in places, is also an observation of post-traumatic stress and survivor’s guilt. A celebration of family and friendships and a life-affirming tale of trust and forgiveness wrapped in a bow. It shouldn’t work as much as it does and the issues with sound and not so impressive CGI attempt look stick like a craw but the screenplay has charm and Mason shows a lot of promise. A lot of smart thinking too. Comedies may be considered easy pickings and while Elevator Baby isn’t the most highbrow of them, it is definitely a decent outing for all concerned.